But there is a ringing in the ear that is repetitive and not an once sporadic one, which is tinnitus. There are people who have it and do not realize yet, and there are people who just with a little tingling it hurts a lot. Whatever it is, it is not good for the body, nor comfortable for day to day.

What does the research say?

There are several reviewed studies that involve the participation of the tensor muscles of the eardrum (the hammer).

There are studies that demonstrate the absence of tinnitus if the head and spine are well aligned.

The hypertonicity (too swollen) of these muscles can cause tension in the insertion of the muscle that connects to a piece of cartilage in the inner ear. This increase in tension creates stress that then, alters the sensory input to the nervous system.

Many patients report that anti-anxiety medications, alcohol and other external influences temporarily decrease or eliminate the symptoms of tinnitus.

That is, it seems that when there is a normal tone in these two muscles, there is a normal neurological entry into the central nervous system. However, when these muscles become spastic, it sends an aberrant signal to the central nervous system that causes replication of tinnitus symptoms. If anti-anxiety medications and other muscle relaxants temporarily help reduce spasms in these muscles, what can be done to eliminate one of the underlying causes? Removing the symptom without treating the cause is never a good solution.

A 2014 study shows the positive results of a 46-year-old woman with neck pain, tinnitus and hearing loss who was treated with vertebral adjustments.

She had been treated unsuccessfully for 8 months when she decided to go to a chiropractor. After 3 chiropractic adjustments, her hearing and associated symptoms improved significantly.

A few adjustments later, her audiogram was normal.

What Could be the cause:

Many times it can be a muscular dysfunction. And it is that muscle contractures and muscles that bother us or we feel more harder tend to protect a wrong movement that the vertebra is wanting to do.

When you go to the ordinary doctor for a tinnitus there is not much to do. Medical science offers few solutions today.

They tell you that they don’t have a successful treatment yet.

Tinnitus is prone to:

Many patients agree that tinnitus worsens with stress.

However, many do not find a real correlation with what makes it increase or decrease.

Also to those who suffer from dizziness and vertigo.

Many people go first to an otorhino, and we don’t say that you don’t do it, huh.

But, sometimes, ear problems are resolved with a vertebral adjustment.

The nerves that connect the ears and the brain go through the cervicals and without realizing it, one of them or even more may have been pinched.

It is important to address the condition, rather than the symptom.

Tinnitus, which is also called constant beeps in the ears, is usually a lesion of the spine, specifically, the upper cervicals.

You can quiet down  a little now that you know that it is a symptom, and not a condition itself.

This means that the problem is not your ears, but another part of your body.

Subluxation may also come from another area that is not cervical although it is less common.

After teaching the spine its correct position, normal nerve function is restored and the body will return to the best possible health.

Having a healthy lifestyle as we said in a previous article, and some interesting changes (which are not bland) in the diet, will help your nervous system and nervous tension.

So if your ears are beeping or whistling, you know where to go 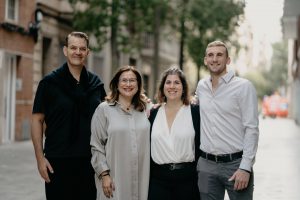 Centre Quiropràctic L'Olivera
4.9
Based on 72 reviews

Fevida
11:36 15 Dec 22
Good find. Very cosy, quiet and familiar. It is very comfortable, many details in the treatment and in the harmony of... the place that gives one serenity. Loik is a big guy in every way. Thank you Cristina for your smile and kindness! Always on point!! Congratulationsread more

Cesar Gil
07:42 28 Jul 22
I have been coming for several years and without a doubt my day to day life has improved. Good professionals with a... close treatment.read more

Nuria Nieto
15:55 13 Jul 22
fantastic! They leave you as good as new and teach you to modify your self-care habits. The best.

Lau Martinez
14:18 08 Apr 22
I arrived at the center in a lot of pain and unable to do the exercise I usually did. After a year, I feel almost... pain-free and I have been able to gradually return to exercise. Very happy!read more